As the LEGaTO project nears its completion, we examine how the main goals of energy efficiency have been achieved. In this column, we explore the techniques that have been implemented in the toolchain back-end (runtime library system) and describe the achievements in contrast to prior approaches. We focus on heterogeneous scheduling techniques implemented as part of the moldable XiTAO C++ library, and discuss the energy reduction that is enabled by the usage of FPGA. We report both scheduling approaches integrated into OmpSs@FPGA as well as FPGA undervolting with controllable error rates.

Modern compute platforms are increasingly heterogeneous. This encompasses platforms with asymmetric cores -such as big.LITTLE- and platforms composed of CPUs, GPUs and FPGAs. Schedulers for asymmetric cores have traditionally taken a very simplistic approach whereby performance critical applications are mapped on big cores and less critical ones are mapped to slower, yet more energy efficient cores. In the context of parallel applications, the scheduling problem is more complex, as different tasks in the same application may be scheduled on a set of cores of one type, while other tasks could be scheduled on cores of the same or different type. Within LEGaTO, we have researched novel schedulers for task-based applications that minimize energy consumption on heterogeneous platforms.

A core observation that motivates our design is that different task types achieve peak efficiency on different core configurations. Figure 1 shows this behavior. The figure shows the energy required for executing two different types of tasks (matrix multiplication and memory copy) on the  Denver and A57 cores that are present on an Nvidia TX2 development board. Interestingly, while matrix multiplication is most efficient on two Denver cores, the matrix copy is most efficient when executed on a single A57 core.

To this end, methods to model task performance and task power consumption at runtime are required. To achieve this, we are extending LEGaTO's moldable XiTAO C++ work stealing library with a plugin architecture as shown in Figure 2. This architecture allows the runtime scheduler to query task performance predictions and power profiles on a per-task basis. The scheduler then uses this information to minimize the energy execution for each task, individually. Finally, to limit the power consumption of idle cores participating in work stealing, we have implemented an exponential back-off scheme that reduces the activity of idle workers by putting them to sleep for increasingly long periods, up to a maximum.

To validate the approach, we execute the runtime scheduler (called LENC: "Lowest Energy without Criticality") on both the TX2 and on a multicore Intel platform and compare with various scheduling alternatives. Both platforms provide different energy modeling methodologies. Our results over three applications (VGG-16, Heat and SparseLU) show that LENC achieves an energy reduction ranging from 31% to 75% compared to a work stealing scheduler (RWS) that is completely agnostic to task types and moldability, as seen in Figure 3.

The program uses OmpSs to offload tasks, either to the FPGA or the ARM cores. The FPGA is programmed through OmpSs to have 3 instances of the matrix multiplication IP core, that can be used in parallel, and independently of each other.

Figure 4 shows the power consumption of the execution of 7 experiments, in this order: 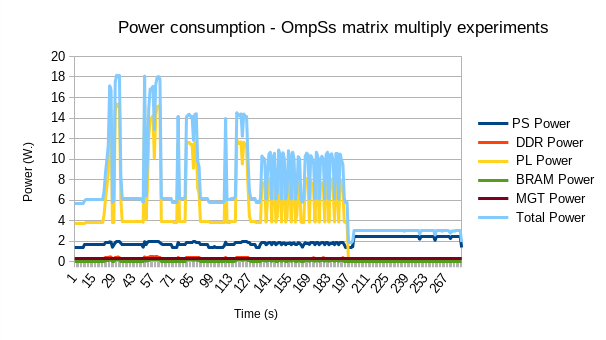 If we compute the GFlops obtained by the different sets of executions, we get:

Concluding, the code transformations done with OmpSs to exploit matrix multiplication on the FPGA result in an increase of the GFlops/W obtained from the Zynq U+ chip, increasing power efficiency when using more resources in the FPGA fabric.

To understand the combination of multiple effects mentioned above, one must study the effect of the environmental temperature on the power-reliability trade-off of FPGA-based CNN accelerators under reduced-voltage operation. To this end, we use Xilinx´s DNNDK accelerator; utilize GoogleNet as a benchmark and undervolt VCCINT, which is the voltage rail associated with the FPGA computational  resources. To regulate the FPGA temperature, we control the fan speed using the PMBus interface. We also use the same PMBus interface to monitor the on-board live temperature. By doing so, we can test different ambient temperatures ranging from 34◦C to 52◦C degrees.

Figure 6 shows the effect of temperature on the accuracy of the reduced-voltage CNN accelerator. Our experiment demonstrates that higher temperature at a particular voltage level leads to higher CNN inference accuracy. This is because at higher temperatures, there are fewer undervolting related errors due to decreased circuit latency, an artifact due to the Inverse Thermal Dependence (ITD) property of contemporary technology nodes.